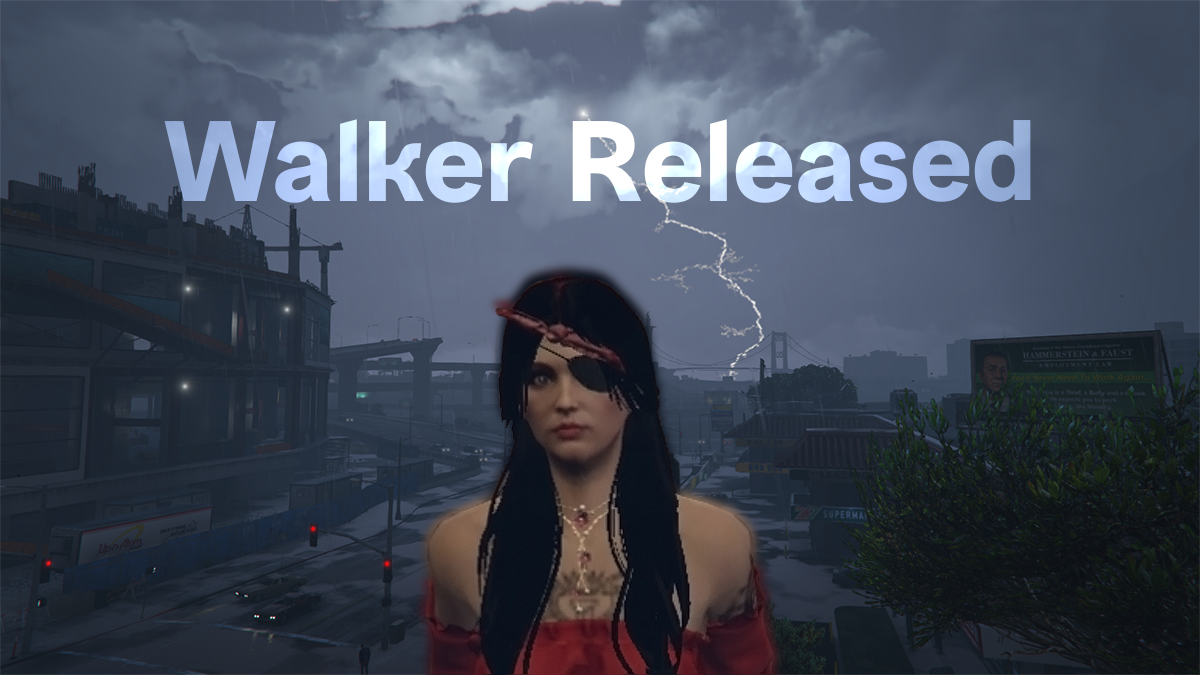 Los Santos, San Andreas — Elizabeth Walker, who less than forty-eight hours ago had been in the process of being reconsidered for a second bail, has since been released following a guilty plea. She is expected to be returning to the public within hours of this final decision.

According to an official police timeline, events involving Elizabeth Walker began June 30th, 2022, when a 911 call was made to the San Andreas State Police (SASP) regarding a disemboweled dog having been discovered at Inkdigenous Tattoo in Paleto Bay. According to the case file, Elizabeth Walker was the one to initially discover the dog and reported it to the police. Annabelle Devlin, the owner of Inkdigenous Tattoo, was also informed and later arrived on the scene to provide a statement. Neither named anyone who could’ve been capable of a disturbing crime and as such, no suspects were known at that time.

Notable evidence gathered at the scene involved a foreboding note and a circled “W” symbol.

A similar incident would occur at the Cluckin’ Bell Factory a few days later on July 2nd, with chickens being brutally dismembered and thrown throughout the building. The “W” symbol appeared again without any explanation.

On July 4th, a stabbing victim was found outside of Sandy Medical Center following both an anonymous 911 call and one made by San Andreas Security Services (SASS). While the injured party was receiving medical attention, a second call, this time made by Elizabeth Walker, came through dispatch. In the call, she identified herself as the assailant by providing the Major Crimes Division (MCD) with the primary location of the crime, in addition to mocking the victim.

In their statement, the victim said that while clocked-in at Paleto Custom, they were approached by a woman looking for “custom parts” for her car. Another individual, a man, came into the establishment soon after. He held them up at gunpoint, at which time Elizabeth Walker joined the man in threatening the employee, seeming to be working with him. At this point, the two of them took away any means of communication and transported her to an unknown location, where they proceeded to stab the victim and carve the “W” symbol into her arm. Before falling unconscious, the victim recalled hearing the female say, “this is a message to the people of Paleto”. Afterward, Elizabeth Walker became a suspect but was not apprehended for the crime at that time.

A day later, on July 5th, another person was attacked by Walker while alone at their business. They, like the first victim, were tortured but thankfully received medical treatment shortly after. Elizabeth Walker was once again identified as the assailant but could not be apprehended at that time, thus continuing to terrorize Paleto Bay residents. She went on to kidnap two other residents between July 6th and July 12th, torturing and mutilating both victims. Ms. Walker appeared to have no other purpose than to question them and force her “judgement” upon them.

She continued to elude police, going so far as to say they’d “never catch me” to one of her stabbing victims. This, however, would be one of her last incident involving Paleto Bay, as her later crimes became drawn toward the city of Los Santos. This was due, according to one resident of Paleto Bay, to the fact that the people of Paleto had “chased them out” (referring to Elizabeth and her accomplices). Since then, graffitied “W” symbols have appeared throughout the city, initially focusing on Vinewood business and surrounding residences before slowly moving further south.

Elizabeth Walker would not be officially arrested until July 17, 2022, when she was discovered by detectives who had read Weazel’s Barry’s Tour Guide #1: Follow The Light Into The Dark, heading to further investigate the area mentioned in the guide. They were intrigued when Barry Malvo detailed a hidden pathway in Zancudo Grande Valley, mentioning an “old, wooden frame” that had “some red text carved into the wood reading, ‘Follow The Light Into The Dark’”. Detectives, who noted having not visited that area since the Driftwood killings, saw fit to investigate it for anything strange after the mention of “carvings”.

Upon arrival, MCD found Elizabeth Walker standing nearby in some tall grass, holding a knife near a person bound and bleeding sitting in front of her. One officer noted that she seemed familiar at first glance. They requested she step away from them, which she hesitated to do at first before later complying. The victim, who was found marked, identified her as Elizabeth Walker and told officers on the scene that she’d kidnapped them.

Elizabeth Walker was promptly transported to MCD HQ, where she was read her rights, interrogated, and charged with five counts of Kidnapping, five accounts of Torture and Mutilation, two counts of Animal Cruelty, as well as one count each of Brandishing A Firearm, and Possession of Stolen Property. Shortly after, she was read bail conditions and released on bail until trial.

On July 26th, nine days after being released on bail, Elizabeth Walker returned to Paleto, kidnapping and torturing two residents. When she was accurately identified by her appearance, her familiar actions, and her vehicle by both the victim and police, she was apprehended and taken to Bolingbrook State Penitentiary by SASS to be held until trial. Accordingly, an additional count of Kidnapping as well as Torture and Mutilation were added to her charges.

While imprisoned for breaking bail, she notably was able to acquire a phone and make several threats to members of the public, detailing to some that she was not “done” and would return to attack them at a later date. Police have investigated; however, at this time they have not released any information as to how she was able to obtain a cellphone within the prison. She received no additional charges for any threats made.

On August 1st, Elizabeth Walker’s lawyers were attempting to negotiate a second bail agreement for $25,000 when they abruptly informed the court that Walker intended to change her plea to guilty for all charges. They requested the maximum fine and time for the charges, which Judge Dan Lighten accepted, as the court acknowledged that she had more than completed the sentencing via time served.

Therefore I will be sentencing Ms. Walker to 725 months imprisonment – with time served accounted for she will serve 0 further months – and will be ordered to pay a further fine of $3,500 to the state ($8,550 for the original charges has already been paid). Ms. Walker should hand this fine in to a law enforcement officer within 72 hours before a warrant is placed for her arrest to process this fine, and she will be found in contempt of court should this occur.

Elizabeth Walker has served her time for all charged crimes. Nonetheless, multiple witnesses involved with or in the vicinity of these prior acts still receive threats and markings from the “Walker” family. Specifically, we refer to the recent threats on a majority of Vespucci businesses. These businesses are being graffitied and marked, similar to what happened in Paleto Bay.  The Vespucci businesses that have been “hit” are as follows: Remedy, Pearls Seafood, Seasons Greetings, Euphoric Cannabis, and Burger Shot.

According to witnesses, the Walkers “want all the businesses gone, so they can have it for themselves and take over”. It’s unclear at this time if any other businesses residing in Vespucci are being targeted, but people are being advised to proceed with caution and report any further incidents to MCD or SASP.