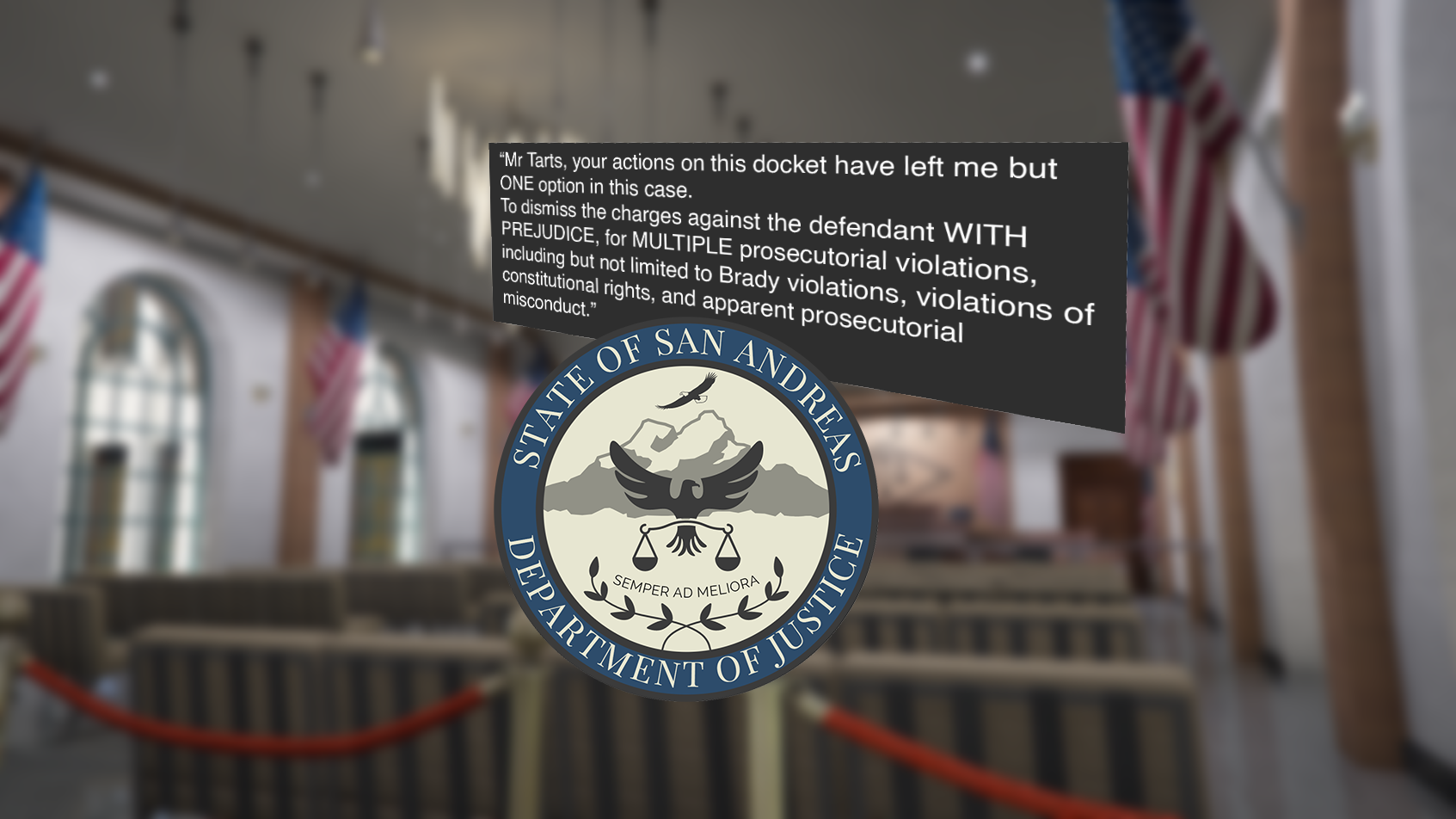 Weazel News Understands that Elizabeth Walker has died, according to communications from the Circuit Court in an on-going restraining order case.

Los Santos, San Andreas — Known serial torturer Elizabeth Walker has been given an incidental pardon for murder and torture charges after Judge Samuel Openshaw dismissed a case due to apparent “violations of constitutional rights, Brady violations,” and “prosecutorial misconduct” by Prosecutor Tobias Tarts.

On the fourth of September, the Department of Justice filed eighteen criminal charges against Elizabeth Walker from First Degree Murder, to Torture, Mutilation and Kidnapping. According to the statement of facts. Will Walker, Elizabeth’s father was murdered after he arrived at Los Santos International Airport on the third of September. This led to the arrest after an extensive investigation according to the Major Crimes Division.

After the arrest on the fourth of September, Elizabeth Walker plead not guilty to the charges and was denied bail by Judge Lighten. Discovery was opened on the tenth however no scheduling notice was sent seventy-two hours after the opening of discovery.

Early on the eleventh, lawyers from the Public Defenders officers representing Ms Walker changed the plea of one count of attempted First Degree Murder to guilty. After this the prosecution submitted the Computer Aided Dispatch incident report into the record, with the officers involved portion redacted.

“I have redacted the names of officers involved due to the multiple threats from Ms. Walker concerning officer safety in the past.”

Earlier on the eighteenth of September, Tobias Tarts who is the Senior Prosecutor of this case submitted evidence into the record and then called upon the Chief Justice to re-assign the case to another justice.

“It has become apparent he is not [available] because of his lack of responses to this docket. Therefore, we humbly move to reassign the case to a judge who would hear this and have this case sped along for the sake of justice.”

Mr Tarts, your actions on this docket have left me but ONE option in this case. To dismiss the charges against the defendant WITH PREJUDICE, for MULTIPLE prosecutorial violations, including but not limited to Brady violations, violations of constitutional rights, and apparent prosecutorial misconduct. On top of this dismissal, you will receive one count of Misdemeanor contempt of court, carrying no time but a fine of $5,000 as well as this case will be sent to the Bar committee for review of your bar license and your ability to practice law in the future.

According to Judge Dan Lighten, Tobias Tarts has paid the fine outlined by Judge Openshaw. Weazel News contacted the Judiciary for comment, however in line with their procedure they declined to comment on ongoing cases. The Department of Justice was also contacted.

The Department of Justice has filed a General Appeal on the case, in the brief they state.

The brief also goes on to state that “at no point in time” did State prosecutors “violate or attempted to violate the defendants rights.”

The State would ask the Appellate Court to reverse this erroneous decision and grant the State it’s right, and the defendants alleged victims’ their right, to a fair and just trial.

Elizabeth Walker plead guilty to separate charges on the eighteenth. That case was operating under deferred contest.

Stay with Weazel News as this story continues to develop and analysis expands.