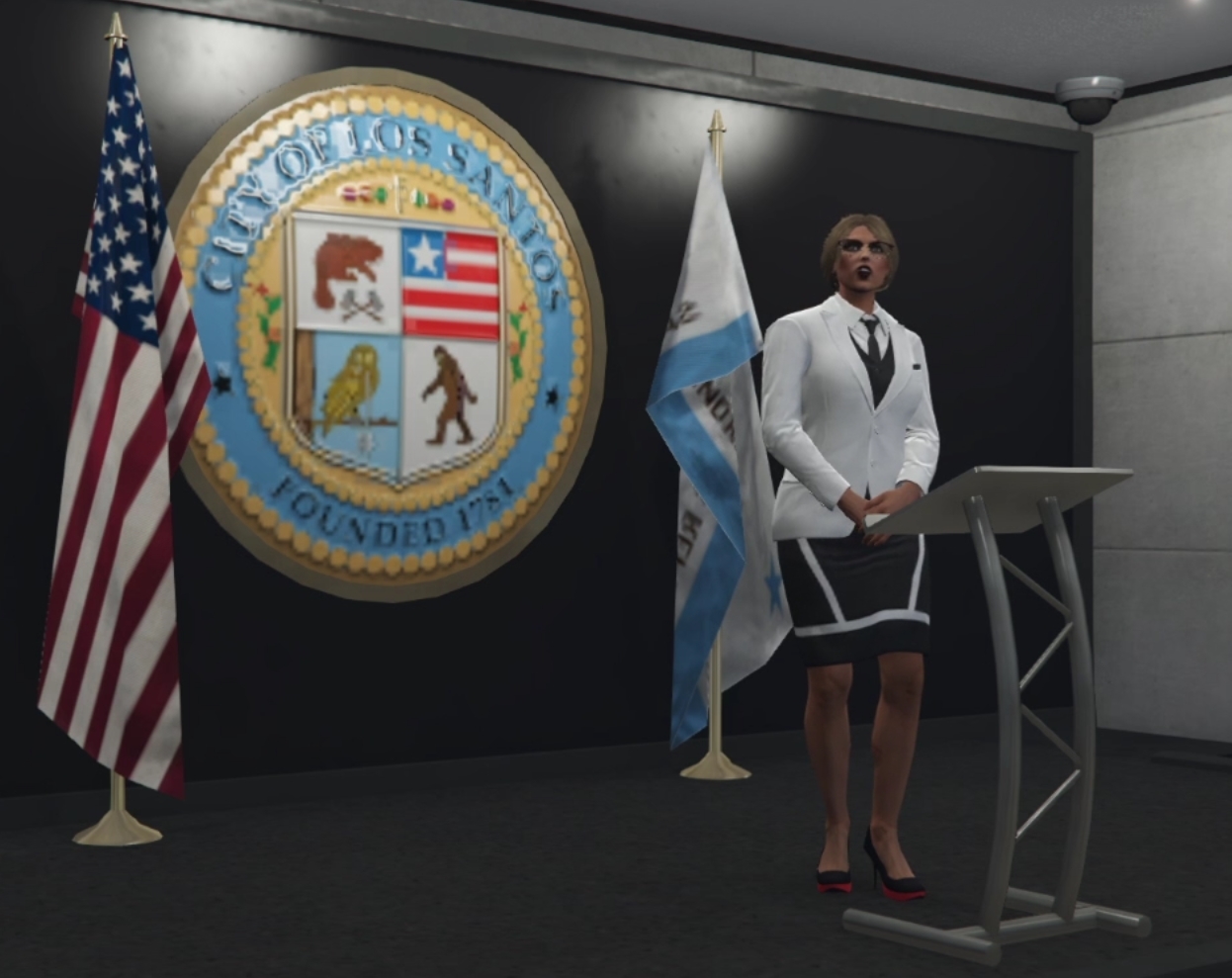 Los Santos, San Andreas – This evening, city hall filled with press, elected officials, and concerned citizens as the government hosted a two-part Town Hall. While the latter half of this event featured the announcement of a government-sponsored $1 million reward for the victims of a serial killer, the evening began with a Q&A featuring Associate Justice Charlotte Avery.

Associate Justice Avery had presided over a recent emergency injunction filed against “Weazle News”, CNT, and “Ramsay Thompson” by state prosecutor Nigel Barrington over an alleged article about now-deceased serial killer Ray Fritz. Despite the obvious typos and lack of care in the filing, the judiciary chose to take up the complaint and assigned Justice Avery to review it.

Before that happened, Associate Justice Avery acknowledged, Mr. Barrington sent out a mass email to nearly every sitting judge as well as the MCD Detective in charge of the investigation. This email sought to provide the judiciary with non-public information highly relevant to the case without including the named defendants in this communications. The filing itself, which was public at the time, failed to provide even the most basic explanation of what the injunction was about. The state marked the topic as “REDACTED” and bypassed this withholding of information by providing it directly to the judges without providing the same courtesy to the defendants who would be subject to the injunction if granted.

Associate Justice Avery, realizing that Mr. Barrington had nearly conflicted every member of the judiciary from taking up the case through these communications, removed herself from the conversation as soon as it became clear she would be assigned to oversee the filing. In the course of hearing the arguments of counsel, Associate Justice Avery shared at the Town Hall, she ruled that CNT (who were writing the alleged article entirely on their own without written or publishing contributions from Weazel News) were to be barred from including the names of witnesses or the announcement of a private bounty against Ray Fritz in said article.

Several days later, CNT did publish an article on this topic, which Associate Justice Avery claimed was in “pretty direct violation of this order”. These actions led state prosecutor Nigel Barrington to file charges against “Ramses Thompson (On behalf of CNT)”, seeking a felony charge of Obstruction of Justice over allegations that the article “did incite vigilantism in regards to Ray Fritz and the Hands investigation”. The filing also included a Contempt of Court charge for violating Associate Justice Avery’s order, which was approved just before the Town Hall and is now awaiting the court’s ruling on time and fine to be levied against Mr. Thompson.

While tonight’s press conference shed more light on the actions and perspective of Associate Justice Charlotte Avery, the public was left with more questions regarding the conduct of state prosecutor Nigel Barrington. It is surely a violation of legal ethics to directly contact the judiciary to provide them with material evidence that has been intentionally withheld from the other parties up to that point, knowing that one of those judges would have to be assigned to oversee the filing shortly thereafter. Mr. Barrington proceeded with allowing the hearing to unfold without immediately providing the redacted information to the defendants, who were forced to seek counsel without fully knowing why they were the targets of a late-night lawsuit from the Los Santos Police Department. Citizens of San Andreas are now left wondering if this is typical behavior from our state prosecutors, or if any corrective action will be taken to ensure this doesn’t happen again.

View the full Town Hall with Associate Justice Avery below: