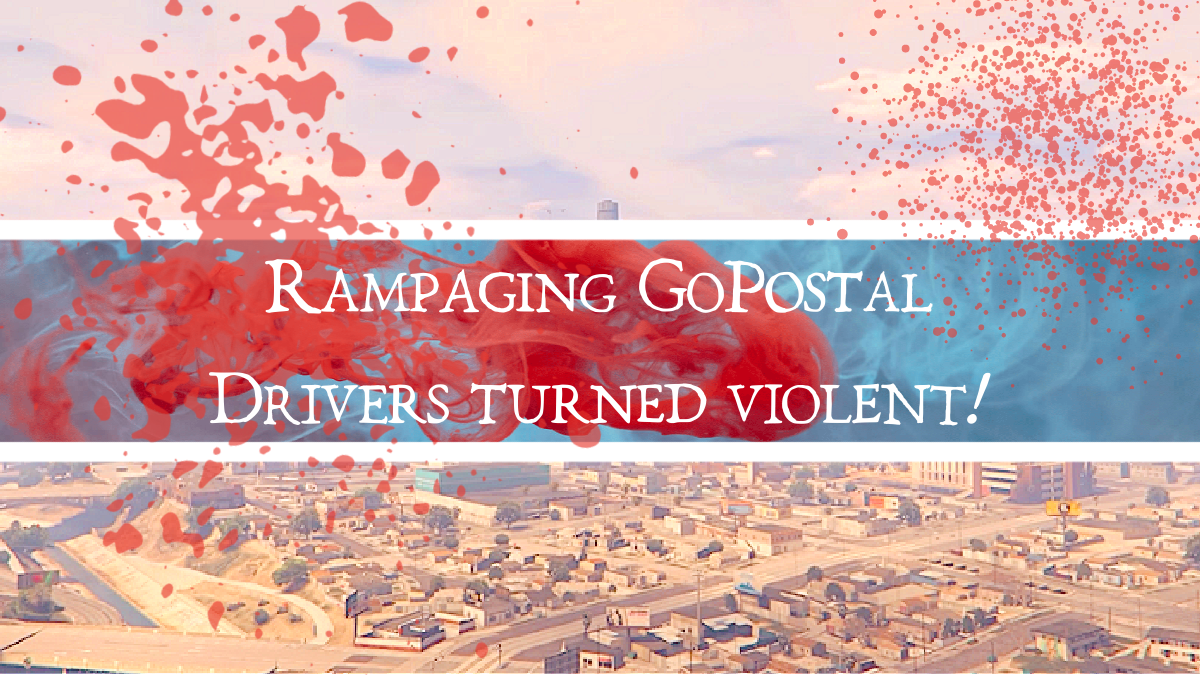 When is fast delivery too fast? In the days of express delivery, next-day or even same-day delivery, we just expect our online shopping goodies to be plopped at our feet without much thought of where they came from or how they got here. But what if in today’s fast-paced society, the quicker we expect things, the more corners companies may cut in order to comply with the need and supply demands.

On a bright morning where the skies were spread thickly with sunshine, myself and Erin Murphy were just standing outside the Weazel News HQ conversing when all madness broke loose before our very eyes! A GoPostal driver zoomed past us nearly crashing as he hurtled around the corner, only to abruptly stop just as a man in a white suit shirt and black formal trousers was passing by. The GoPostal driver exited his vehicle to swing at the man in a suit, engaging in a boxing fight which he lost as fists flew between them. As we looked on in shock, lost for words, there were two local citizens who ran in fear screaming due to the sudden outbreak of violence. Another amused onlooker decided to record the situation with their phone, only to drop the phone and have it crushed beneath their feet in the mayhem.

After defending his life, the man in the white suit shirt fled the scene, leaving the GoPostal driver laid out on the floor with various fist-inflicted injuries. The local EMS and Public Works were called to attend to the messy situation lying in the road. However, not three minutes after the arrival of Public Works, another car came zooming around the corner and crashed into the side of the tow truck. The two inhabitants exited their vehicle with weapons in hand and began shooting wildly at everyone near them!

Myself and Erin dashed for cover as to not get caught in the crossfire; however, the poor Public Works worker Veronica Corvus was sadly shot in the shoulder while her friend valiantly scared off the second perpetrator with his fists. Not being one to stand idly by, all three of us bundled into the back and front seats of my car and hurtled off towards the hospital to get treatment for the bravest of tow truck drivers.

After conversing with those at the hospital and other citizens within our great city of Los Santos, it seems to be a prevalent theme and not the first time something like this has happened. Which leads me to ask the question, what exactly is making the GoPostal drivers so inclined and prone to violence? A man I interviewed by the name of Vincent Darling gave us his perspective on these incidents:

I have seen manier GoPostal vans stop their deliveries mid transit and get out with their only intention being to attack people. Maybe it’s just a stressful job and they get fed up some days? I don’t know.

So it seems dear readers that this is indeed, not a one-off thing and sadly a scarily frequent, violent occurrence! The question is, what is the true cause? And most importantly, what is GoPostal going to do about this? After seeing a tweet on Twitter from one Eve Smith, it appears that perhaps GoPostal is not the only delivery company cutting corners when it comes to speed and safety when driving. Is it a spreading crisis? Are they competing against each other at the cost of both the drivers’ and the general public’s safety? What can we do about it to keep our beloved city safe?

We here at Weazel News hope that everyone stays safe out on the roads, especially from speeding trucks that may or may not be carrying your newly ordered cat plushies.

Do you or your business have something related to city life or foodie interests you’d like to talk to Weazel News about? Contact Evaine Delaney on 8359385850.