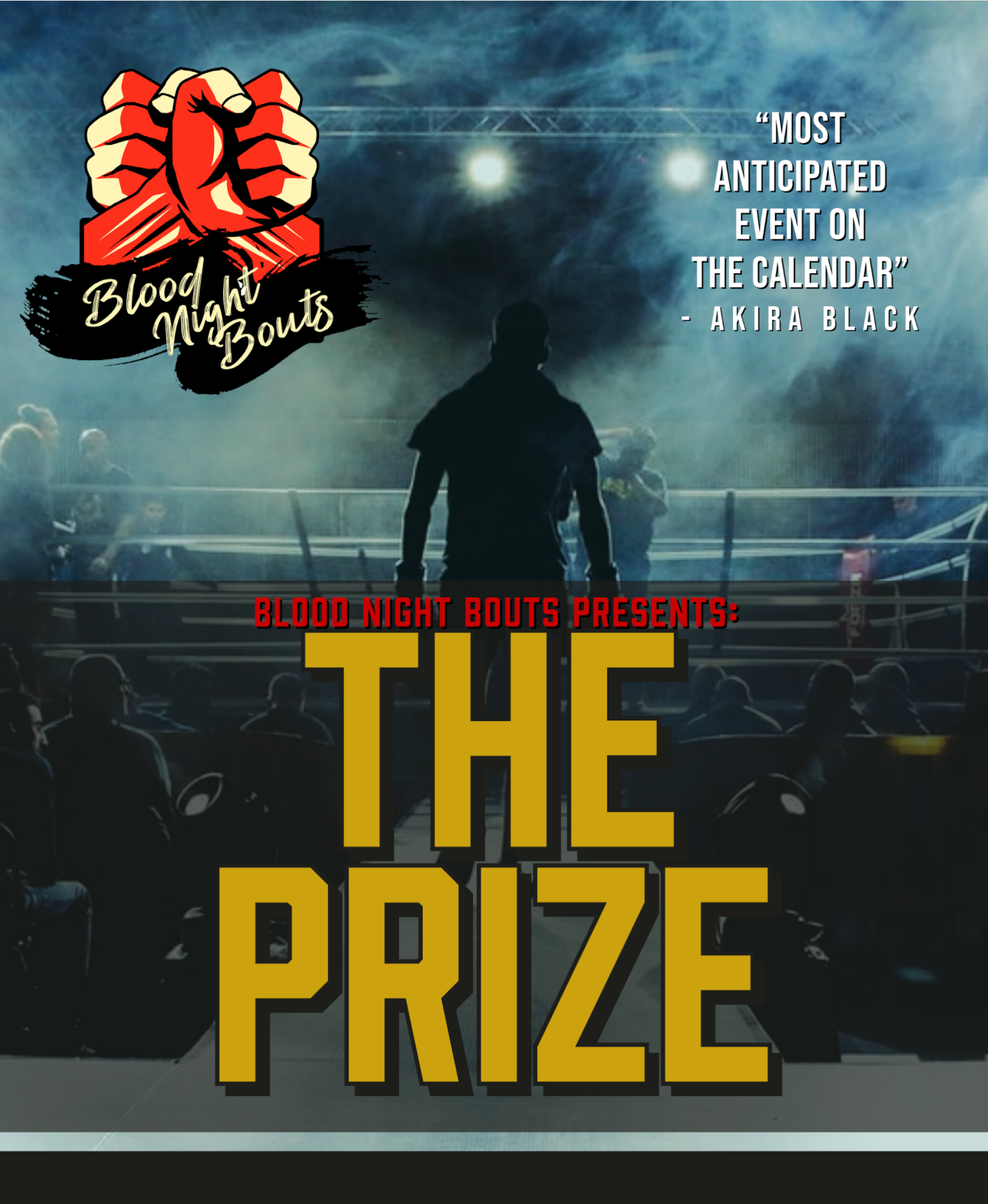 The following match is set for KNOCKOUT! That’s right, Blood Night Bouts is back! It has been over 4 LONG months since we’ve seen some nerds knuckle up. Well the wait has finally ended! Blood Night Bouts held their first prize fight for this season. If you weren’t at the event, well I’m telling you that you missed out. Prior to the Prize fight, there was a Halloween 8 Man Tournament at the Kortz Center for the BBC event where the current San Andreas Champion Mattie “The Calamity” Belmont took the prize home and even accepted a fight challenge from the Governor himself, Richard Starr. As you can see, Blood Night Bouts is shifting into high gear. NOW, let’s get into The Return of Blood Night Bouts Prize Fight!

The night started off with a veteran of the game, Ragnarok, formerly known as The Dullahan, taking on a newcomer of the fight scene, Dante Gravina. These amazing fighters did not disappoint in the first match of the night and it set the pace for the rest of the fights. Dante showed everyone he’s a spirited fighter, but was not able to put down his veteran opponent, and the end of days grew closer with a huge win from Ragnarok.

Match 2 – Berserker vs The Artist Still Known As Titus

The relentless Berserker’s presence is something that can shake anyone. His physique is unlike anything you’ve ever seen and his fighting style is as aggressive as it gets. The Artist Still Known As Titus did not let this phase them though! The two put up an amazing fight where Titus attempted to use Berserker’s aggressiveness against him. They were able to get some solid counters to land, but in the end Berserker was able to power through Titus’ defensive game, reigning supreme!

Next up we had two relatively fresh faces to Blood Night Bouts. By no means are they newcomers to fighting, but two individuals that are making themselves known in Blood Night Bouts this season. The two gladiators fought valiantly until only one was standing. That person was Deadshot after a smart left hook buckled Smokey.

Blackbeard is a familiar face in the scene and always steps up to give it his all. He’s never succeeded in winning a Prize night fight quite yet, but could tonight be different? His opponent was one of Bruiser Gym’s Head Coaches, Doug Lowe. Doug was a surprise fill in for another fighter who wasn’t able to attend. Doug attempted to showcase his skills, but this is not a training session. The young and athletic Blackbeard was able to take down veteran Doug in an entertaining bout!

Match 5 – The Catalyst vs The Inhibitor

Two names poised to help build the future of Blood Night Bouts, The Catalyst and the Inhibitor, squared up next. The Catalyst was at the Halloween 8-Man Tournament the prior night and fought the champ, The Calamity, in the finals. He did fall to The Calamity, but was able to take one round off the champ that night. Will tonight be different? The Inhibitor had quite the challenge to beat, but sadly wasn’t able to overcame those odds. The Catalyst with his quick movements and very strong defensive game was able to take down The Inhibitor.

Match 6 – Starling vs The Soldier

Kyle “Toxic” Steel making his debu…Wait…Is that the veteran formerly known as Kyle “The Racoon”? The former Racoon must have gotten into some toxic waste in the dumpster. Kyle showing a new side of himself and taking on the newbie. Red showed the payoff of her training with Luke McCoy by putting up quite the resistance. Sadly, 2 days of training was not enough to take down Kyle’s form and astonishing footwork, which led to a knockout of the newcomer, Red.

Match 8 – Bellatrix vs The Drifter

It wouldn’t be Blood Night Bouts without veteran fighter Luke “The Drifter” McCoy. Luke’s last match was defending the San Andreas Championship, where The Calamity toppled him to take the title. The time came to see how these last 4 months have treated The Drifter as he took on his rookie opponent. Bellatrix certainly didn’t back down from the challenge with The Drifter, but the seasoned fighter showed he’s very much still in his prime, claiming a decisive victory.

Two Vikings are poised to shed blood, but will Valhalla side with Ragnarok or Berserker? This match was nothing short of amazing. Each punch echoed through the arena sounding like Thor’s Hammer. Both titans put on the match of the night, but sadly only one of these warriors can win. Berserker began to engulf his opponent with his aggressive fighting style, but Ragnarok was able to slip through the cracks of Berserker’s onslaught. Valhalla sided with Ragnarok bringing us one step closer to the end of days as he claimed another victim.

Both fighters showcased what they were capable of in their first round matches. This started off as a sleeper of a match, but the back and forth from these two was off the charts with each fighter getting in their respective dodge combos. Just when the crowd thought Deadshot was about to hammer the final nail in the coffin, Blackbeard landed a knockout blow. Blackbeard moved on to the Semi-finals!

Match 11 – The Catalyst vs The Soldier

The Catalyst, a newcomer who was able to keep up with the champ and narrowly avoided defeat. The Soldier, the man who just toppled the Blaine County Champion. Who will move on? This was the most anticipated match of the second round. Even though everyone was looking forward to it, this match was not nearly as close as the other matches of the night. The Soldier did his best to keep up with his opponent, but The Catalyst won with a masterful show of his dominant defensive style.

Two long term veterans going head to head in the final match of Round 2. Although Kyle’s shown a new side of himself, will that be enough to take down the face of the fighting circuit? Kyle reverted to using his footwork in an attempt to trip up The Drifter, but wasn’t The Drifter’s first rodeo with Kyle and his fighting style. The Drifter showed why he is one of the best and applied his all around skills which were too much for Kyle to handle.

Ragnarok had been on a tear giving his best performance since he was one half of the tag team champions with The Drifter, but Blackbeard was his next opponent. Blackbeard proved he’s a top contender here in Blood Night Bouts by toppling two other fighters to make it to the semi-finals. Although Blackbeard is a veteran warrior, this came down to who had the most knowledge in the cage. That person ended up being Ragnarok as he took down his third opponent of the night in a 2-0 bout. We’re one fight away from seeing Ragnarok bring about the end of days!

Match 14 – The Catalyst vs The Drifter

STUDENT VS TRAINER. The Catalyst started his journey at Bruiser’s Gym and trained under Luke “The Drifter” McCoy. The match started with a handshake between the two fighters. Their first bout was quite eventful. Several intense back and forths showcased how these two fighters know each other so well from their training sessions. Luke was able to take the first round with a smart counter combo to drop The Catalyst. The second round was focused around The Catalyst adjusting to The Drifter’s fighting style and focusing on that defensive style. The Drifter was unable to break the form of The Catalyst in the second round, however, bringing the score to 1-1. In this best of three contest of strength and endurance, we saw both fighters holding their ground. This was a complete opposite from their first match. Both fighters were extremely cautious to avoid making a mistake which led to a much slower match. The Catalyst kept true to his defensive form and attempted to utilize his dodges to topple The Drifter, but was unable to overcome his opponent. The Drifter won the final match of the semi-finals with a 2-1 victory.

Match 15 – Ragnarok vs The Drifter

We couldn’t have asked for a more ideal finals matchup. Both finalists combined made up the former Los Santos Tag Team Champions, The Unholy Alliance. The Ragnarok entered the cage with a resounding praise from the crowd, while The Drifter entered to a mix of cheers and boos. The crowd seemed to be overwhelmingly in support of Ragnarok! In the first round we saw these former allies putting up quite the fight, deftly countering each other’s fighting styles. In the end though, The Drifter was able to overwhelm Ragnarok’s defense, giving Ragnarok his first loss of the night. The second round very much mirrored the first, but we did see Ragnarok get more on the offense this time around. As Ragnarok was coming in for a final blow, The Drifter slipped a swift punch under his chin. With a solid knockout, The Drifter has stopped the end of days from occurring as the crowd erupted into a swell of cheers and boos.

The Drifter is our tournament winner for the return of Blood Night Bouts Prize Fight! A fitting ending for the start of the season and The Drifter planting his place at the top…..

The music hit… and the new challenger stepped up from the commentator table. It’s Meryl “Poison” Ford! She’s the surprise challenger for the winner of this Prize Fight tournament. The Drifter has one more fighter to conquer before he can rest. The difference this time is this fight was a one round, winner take all match. Who will stand tall in this classic fight between these two long-standing rivals? The Drifter and Poison put on an exciting show! Unfortunately it seems the rustiness of Poison showed and it gave The Drifter the edge he needed emerge victorious as the all around winner of tonight’s fights.

After a long, entertaining night of fighting The Drifter reigned supreme! Let’s recognize all the new faces that we’ll need to watch out in upcoming events, especially The Catalyst. Will any of these other newcomers step up their training to better prepare for our next event? Will the veterans be able to keep up with these rookies or will they be surpassed by the new blood? We also got to see the run of a lifetime from Ragnarok in the best showing of his singles career, and barely falling short to his tag team partner. This season is just getting started! Will we see the man who previously toppled The Drifter for his championship, Mattie “The Calamity Belmont, at the upcoming events? You’ll have to tune in to this weekend’s event to find out…