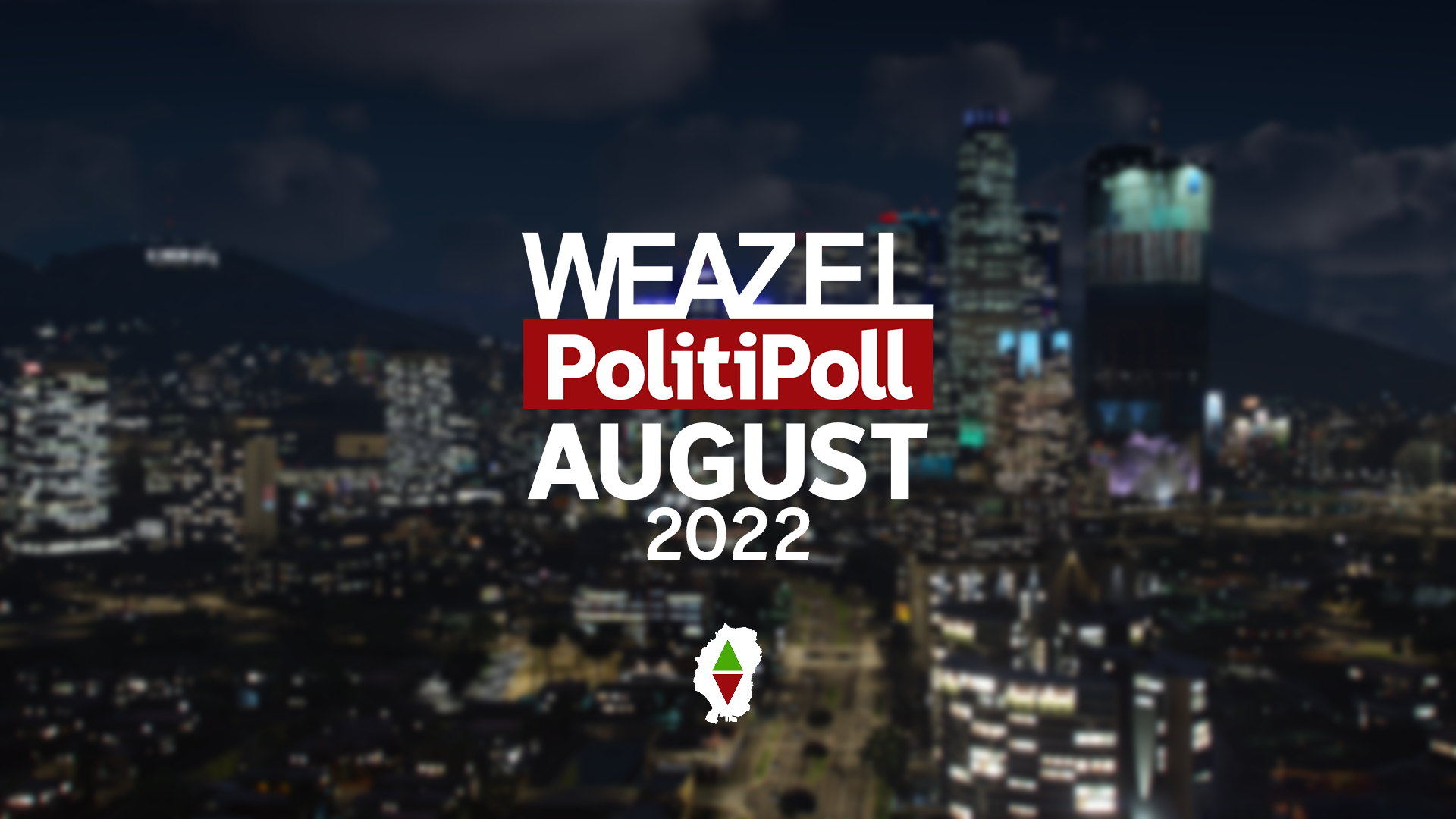 Every month we come together to take a survey, and sure enough this time people really spoke their mind. In July, we emerged from chaos created by outsiders entering our state and trying to tear us apart. This month, it sounds like the people are saying it’s no longer outsiders, but our own legislators who are central to the chaos. Let’s break down PolitiPoll August 2022.

Governor McKenzie has announced she isn’t seeking a second term, making her the 5th single term Governor in state history. Her approval rating has climbed by ~3% since last month, but the disapproval rating has grown by ~10%, indicating further polarization among those surveyed. The rating now sits at 31% Approve and 41% Disapprove, with roughly 27% of voters still undecided. On average, her approval rating over the whole term has remained around 31%, with disapproval around 32%. Overall, that is an ok run for a governor in the state, and significantly better than Governors McKinley (2nd Governor) and Tod (4th). Governor Paxton (3rd) remains the most liked Governor in state history, with an average approval of 44%.

Broken down by political demographics, a majority (36%) of McKenzie voters still support the governor, while 31% no longer support the governor. The Governor doesn’t have majority support amongst any of the party faithful in the Progress or Liberty parties, having left both after being a member at some point.

While Governor McKenzie has seen average approval ratings during this latest government conundrum, the state government’s satisfaction rating has collapsed completely to all-time lows in all categories. PolitiPoll does a small survey amongst a random selection of citizens mid-month to predict any trends. A survey was conducted on the 17th and 18th of July, just as the first DoCL-related bill was introduced. We only recorded a small reduction in government satisfaction, so our expectation was another small reduction for the major poll just conducted. Our predictions are wrong, and this is a blaring warning alarm for the political class in the state.

Between the two major polls conducted on the 5-7th of July and on the 8-9th of August, we have seen a record 34% drop in government satisfaction, bringing total governmental satisfaction amongst the respondents to only 20.8%. For the first time ever, no respondents said they were very satisfied with the government’s conduct.

This record low has also given way to a record high for dissatisfaction, with 79.2% of respondents saying they have some level of concern over the government’s operations. 35.4% of those surveyed said they were Very Unsatisfied, also an all-time record.

It’s clear an overwhelming majority of the state are unhappy with our government/legislature. With an election only weeks away, it’s likely the election outcomes will be unpredictable.

Each month, we ask our respondents if they trust their government. This month, 72.9% of respondents said they didn’t possess that trust. Much of this distrust originates from the Legislature’s attempts to create bills to investigate the Department of Commerce and Labor or the “anti-corruption” bills introduced by Representative Malone. However, it’s distrust from both sides, with one side arguing the bills are being used to punish the Department and others arguing the Department deserves to be investigated for corruption. Many accusations were made by respondents, and some residual anger about the handling of Mutiny emerged as well.

Topic: Alleged Corruption in the Department of Commerce and Labor

The latest political drama revolves around a complex series of events involving the State Legislature and the Department of Commerce and Labor. Instead of asking a yes or no question, we asked respondents their thoughts on the matter. Here is a breakdown of the responses:

With the release of Elizabeth Walker and a rise in serial killers, we asked respondents if the “state is doing enough to prevent Repeat Violent Offenders, Serial Killers and Torturers from getting Bail”.

77% of respondents said they believe the State isn’t doing enough, while 10.5% were satisfied with the deterrents in place today.

On the 28th, the Governor signed an executive order which instituted a state of emergency regarding a “security crisis”. This measure is now being challenged in the State’s Supreme Court, with the measure being placed on a Temporary Injunction on the final day it was meant to be in effect.

Among the public, 41% agree with the Governor’s action to declare an emergency, while 47% disagree with the decision. 10% were unsure what to think of these developments.

On the 1st of August, the Governor vetoed H.R. 147, which is a resolution that would have created an investigative committee to look into the Department of Commerce and Labor. The action is currently being argued in the State’s Supreme Court.

The veto was approved of by 41% of those surveyed, and 50% disagreed that the Governor was justified in taking action against the resolution. A small number of respondents (8.3%) were unsure.