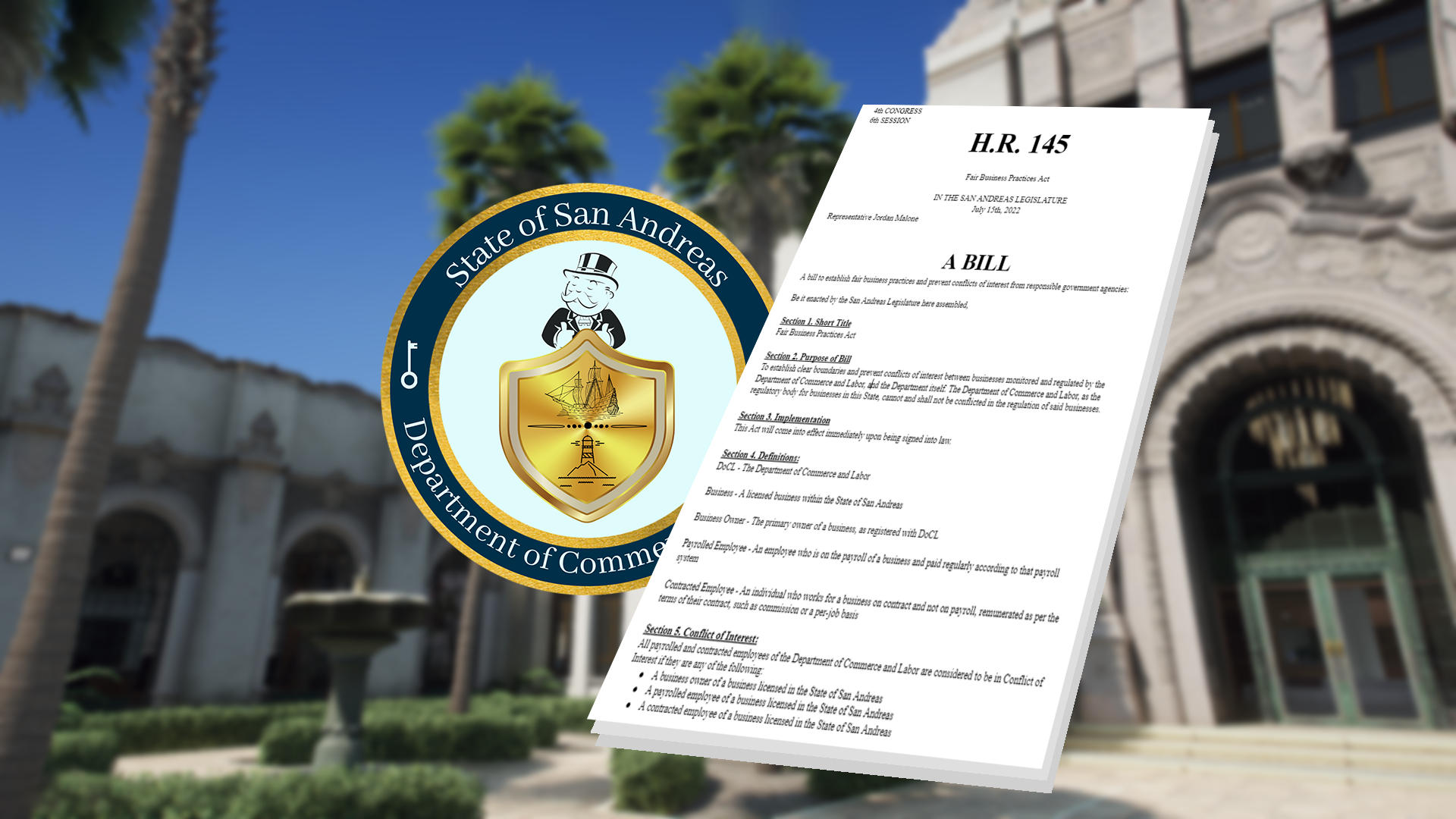 DEL PERRO (WZL) — Representative Malone, a member of the Progress Party, has introduced H.R. 145, the “Fair Business Practices Act”. The bill aims to address conflicts of interest by completely barring any Department of Commerce and Labor (DoCL) employee from being employed elsewhere, including owning other businesses. Since September, the Department has kept a public disclosure record which is regularly updated. If H.R. 145 was to come into effect, roughly 16 of the department’s 27 employees would be impacted, including both Commissioners and the entire Senior Board of the Department who either own or are employed by other businesses.

Konrad Gerhardt, Secretary of the Legisature

Weazel attempted to reach out to some Department of Commerce and Labor employees on the 15th and 16th; however, they declined to comment. On the 17th, the Board of the Department issued a public press release on the matter.

This retaliatory legislation was written in bad faith in an attempt to coerce the Department of Commerce and Labor to halt a warranted and legal investigation into suspicious activity conducted by businesses connected to elected government officials. This bill would prohibit DoCL employees from any personal involvement in private business in San Andreas. This would set a dangerous and alarming precedent in terms of limiting the freedoms of specific government employees.

Board of the Department of commerce and labor

This bill has re-ignited debate regarding former Representative Becks Lawson’s (P) “Conflict of Interest” bill, which was voted down 4-1 in November of last year. The bill, which was gunned down by Ms. Lawson herself, aimed at restricting donations, implementing a multi-job policy for most government employees, and preventing public office holders from decision making where they have a specific conflict of interest. In a public Progress Party meeting, Party Leader Becks Lawson (P) commented on the newly proposed legislation:

The Act is open for negotiation for the public to view. […] A Lot of people did like the conflict of interest act, but a lot of people did have concerns about it. Having legislature members working in the business community leads to a more connected community. […] There are ways forward for the departments, and the end goal for the legislature is a stronger business sector.

Governor McKenzie (SALP) also issued a statement regarding the bill through a spokesperson:

I feel this is a heavy-handed bill in its current form and do not feel it will achieve the intended goal. The Department of Commerce and Labor already publicly list their business affiliations and have for some time. There is also a feedback form you can submit directly to the Commissioners of DoCL as well as an Executive Feedback form that can be utilized if any citizen feels there is a conflict that needs to be addressed. We encourage business owners to reach out to the Chamber of Commerce, their Legislature, and the Department of Commerce and Labor so that their issues can be heard and processed accordingly.

SPOKESPERSON on behalf of the governor (SALP)

The bill has been met with some praise, with one citizen interviewed exclaiming that it would bring an end to “the department’s blatantly obvious corruption scheme” and another saying “It’s about time the Commerce folks stopped using their power to help themselves, this crisis has hit everyone like a freight train, but [the department] has been feeding themselves and leaving everyone else in the Senora Desert.”

There has also been some public backlash regarding the bill, accusing the bill of being hypocritical because Legislative members and other government employees have been working for private business. Weazel News understands that Governor McKenzie (SALP) has been working part-time for Bergowitz Backcountry Autos, and that multiple government representatives are also currently working for private businesses they either own or are associated with.

This bill has also highlighted the debate surrounding the Merryweather Security Contract and the Lieutenant Governor’s position as the owner of the security company. The contract, which was signed in the previous congress, is expected to reopen for bids within the next 30 days.

What do you think of this bill? Lets us know:

Read the full press releases from the Legislatures and DoCL below: