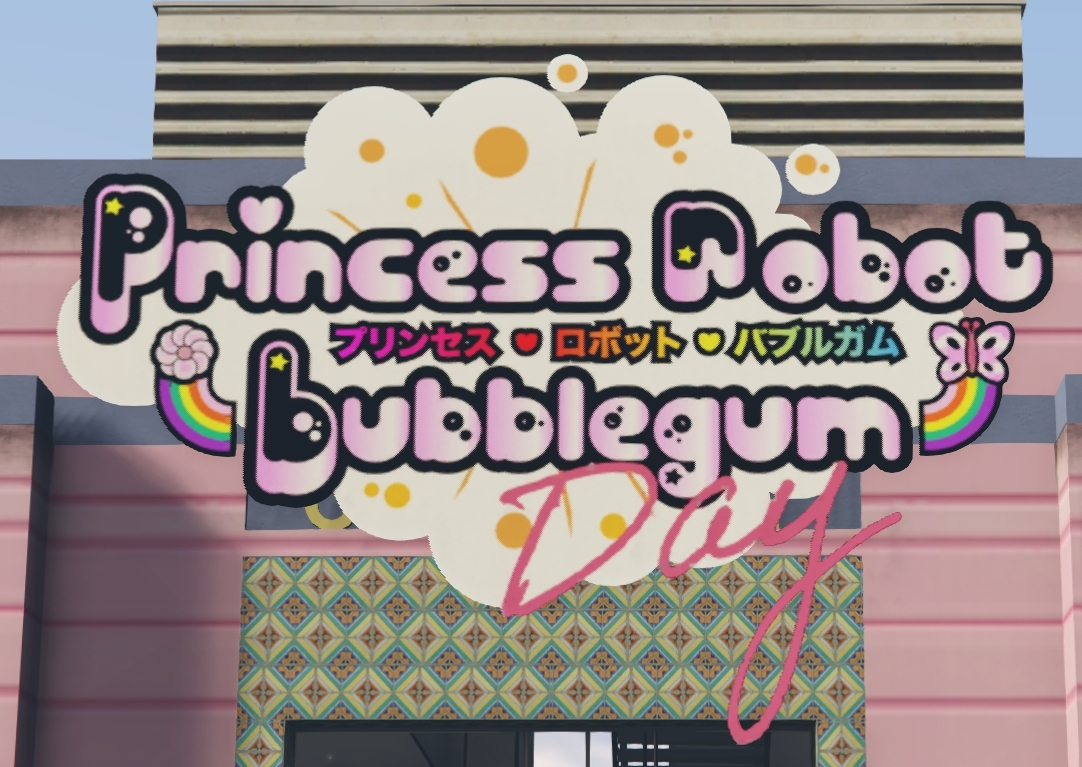 Los Santos, San Andreas – Yesterday, anime fans from across the state came together to celebrate the first annual Princess Robot Bubblegum Day. The brainchild of Tobias Euckland, the event was declared a statewide holiday by newly-elected Governor Vlad Tod in his first executive order. With businesses participating around the state, excited community members celebrated this crime-fighting heroine for 24 hours, dropping in to check out the exclusive wares offered at each location. The main event, however, was a massive parade that circled the state for several hours, starting at Hardcore Comic Store.

Parade participants decked themselves and their vehicles out in pink, sporting Princess Robot Bubblegum from head to toe. They lined up outside the comic store, a cavalcade of cars stretching the full city block. While paradegoers waited for the event to get started, they perused the store itself, grabbing their exclusive Princess Robot Bubblegum figurines and body pillows. Excited participants were seen running around carrying their new prizes as they dashed to waiting vehicles to depart. The parade was led by two vehicles carrying Mr. Euckland and State Representative Hudson Welsh, co-owner of participating business Shadowcade. They pulled out heading east along Eclipse Boulevard, with Pipe Down the next stop.

With dozens of people lined up to grab the cigar shop’s Princess Robot Bubblegum lighters before stock ran out, others danced in the streets and on their decked out cars. The air was jubilant, filled with glee over the opportunity to come together and share their love of the popular anime. As the pink parade spread throughout Vinewood, participants made their way a few blocks further down to Reese’s Pizza.

The popular pizza joint offered a custom themed version of their famous promo box, filled with exclusive products. They also offered a rare opportunity; all purchasers would be entered into a raffle to win a fully decked out Princess Robot Bubblegum car. The excitement was palpable as everyone lined up to grab their collectibles and the chance for even more prizes! As everyone headed back to their cars, the caravan left Vinewood for nearby Mirror Park.

Cars lined the street next to Mirror Park pond as excited participants rushed down to the newly-relocated Cream Pie. This dessert paradise offered a special treat for the holiday, the Itty Bitty Robot Titty cupcake. Everyone gathered on the back deck to enjoy the view over the pond as they devoured their delicious treats. Soon, they were racing back to their vehicles to head around the corner to Shadowcade.

Known for their adorable plushies, the folks at Shadowcade offered their own Princess Robot Bubblegum version to the ecstatic paradegoers. Cars stretched down past the arcade bar as more and more people joined the event throughout the day. One of the highlights of the event, this stop was christened with a group photo at the pagoda next to the building.

The parade headed north from Shadowcade, hopping onto the freeway to head north as it circumnavigated the state. Drivers kept pace with each other down the road as they streamed into Paleto. The next stop took place at local favorite Sally’s Surf Shop, which was selling miniature Princess Robot Bubblegum surfboard toys to celebrate the statewide holiday.

Sally had the full-size version of another anime-themed board on display, which many participants took photos beside. People milled about in the parking lot, excitedly sharing their new collectibles with one another. With everyone’s surfboards finally acquired, the procession continued west of Paleto. Cars moved down Great Ocean Highway, passing through the western side of San Andreas.

The parade finally re-entered Los Santos, heading through Rockford Hills. Streaming along Boulevard Del Perro, the cars turned down North Rockford Drive to approach City Hall. With the state announcing Princess Robot Bubblegum Day as a holiday, the whole building was decked out to celebrate the event. Parade participants gathered on the front steps to memorialize the first year of something that will surely only grow in the future.

City Hall was far from the last stop, however, as the parade made its way over to the newly-opened flower bar The Hanging Gardens. Across the street from CNT in Rockford Hills, they partnered with the media company to sell Robot Bubblegum Reality Checks, the classic cereal associated with the show. Whiskey Business was also set up inside the building, offering their Anime Celebrations Flask to excited shoppers.

Cars filled the parking lot outside The Hanging Gardens, showing no signs of their numbers decreasing over an hour after the parade began. Adding one more stop to the parade, cars moved down the street to Remington’s Fine Jewelry, where they were selling an exclusive bracelet for the holiday. The procession was sidetracked for a while, however, when police officers decided to pull over one of its participants, Meryl Ford, in her Blood Night Bouts truck.

Paradegoers gathered on the sidewalk to protest the interruption of law enforcement, raising their collectibles as high as their voices. Weazel News was unable to interview the officers for comment, as they quickly left the scene under the jeers of onlookers. The crowd slowly trickled back to the jewelry store to obtain their wares before heading back to the final destination, Hardcore Comic Store.

Having reached the end of the parade, participants milled about in front of the store before gathering around owner Tobias Euckland who gave an impassioned speech to thank them for being part of the holiday. Several participating businesses that hadn’t been visited by the parade were also set up outside, offering their exclusive wares for the day. Remedy Aromatherapy had a special pink bath bomb, while Vinewood Self Storage was selling a Princess Robot Bubblegum version of their “Lockie” toy. Even with the parade concluded, there was still plenty to celebrate!

Weazel News caught up with Mr. Euckland for this exclusive interview. He shared the inspiration behind Princess Robot Bubblegum Day, the inside scoop on how it became a state holiday, and expressed his thanks to everyone who contributed to the event. With businesses participating from across San Andreas, it was an extremely successful event, bringing the community together to celebrate the show’s long-time fandom. We can’t wait to see what will happen for this holiday next year!

Let’s take a closer look at all the great paint jobs seen at the parade this weekend: