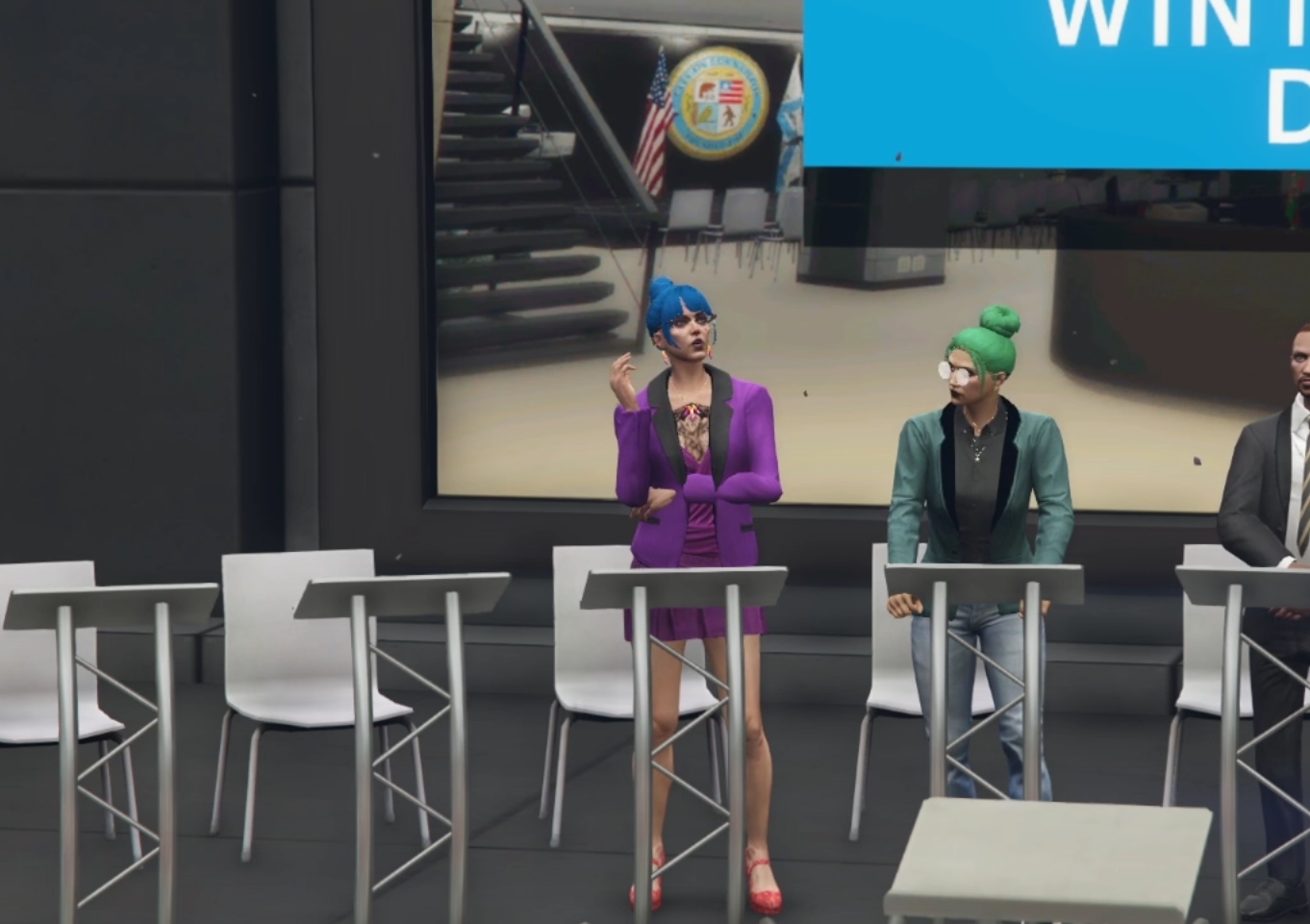 Los Santos, San Andreas – As the only incumbent candidate able to attend Sunday night’s State Representative Debate, Becks Lawson found herself in a unique position. While every other candidate was new to elections, she brought her campaign experience as well as her term in office to bear on the event. As with every other candidate, the moderators posed two questions specifically for her to answer before the rest of the stage could chime in for rebuttal.

What does corruption mean to you and how do you plan to address it in your policies?

Representative Lawson started by declaring “corruption” to be a buzzword that is often overused to the point of being meaningless. She felt that many ways that term is used today are better explained by miscommunications, failures of government, or incompetence. Based on her own experience in office, she sought to provide a more useful definition that could be applied effectively in pursuit of better government.

To me, corruption is using your office for personal gain above the people of the state.

As a sitting State Representative, she took pride in serving the people of San Andreas, directing her toward initiatives like the Department of Human Services, which provide programs to benefit those most in need. To give an example of corruption, she talked about elected officials using their position to benefit a friend’s business. She warned people to be careful about correctly assessing when something is actually corruption, since many misidentified problems can instead be solved by improved lines of communication or more effective management.

Perhaps intimidated by her experience as the only incumbent present, or instead simply finding themselves in agreement with her response, all five candidates declined to pose a rebuttal or further address the topic.

Do you think the current penal code is too harsh, too lenient, or just right, and why?

With the second round of questions kicking off, Becks Lawson was pondering the intricacies of the moderator’s inquiry when the debate was interrupted by a megaphone in the audience. In what appeared to be the replay of an audio recording, an unidentified voice stated “What’s a politician putting hits out on people for and getting involved in this life?”. Overlaid with that question was a second voice which appeared to be that of Representative Lawson’s, saying “Honestly? I thought I did enough good.” The recording, which remains unconfirmed at this time, ceased in that moment, leaving the candidate appearing flustered for a moment. The moderator quickly took control of the situation, re-centering the event back on the question at hand. In an attempt to recover from her surprise, Candidate Lawson requested the inquiry to be repeated to give her time to gather her composure.

In addressing the current state of the penal code, Becks spoke to minor infractions such as parking violations needing higher fines, while many offenses that includes prison time are too harsh in those particular expectations. While the penal code provides both a time and fine for most charges, she felt these provide different levers that need to be well-balanced in our criminal justice system. She also pointed out the nuance of addressing problems with crime in our society that go beyond what the penal code is capable of.

In rebuttal, Travis Ray charged that the current penal code is resoundingly too harsh in its current form, “jailing everybody for even petty offenses”. In particular, he took aim at misdemeanor offenses, which he felt require far too much jail time for the nature of the crimes. He also felt that police have their “hands tied” when it comes to providing leniency for the accused who plead guilty to charges. While they are able to reduce the length of a sentence for such a plea, Mr. Ray stated that his own experience as a former defense attorney showed him that the same cannot be said for fines, which generally are not reduced and can serve to bankrupt the accused. We need a system that’s more flexible to meet the needs of individual situations, he claimed.

Representative Lawson agreed and took the idea further into creating an ecosystem of criminal justice that goes beyond just jail time and fines. As an example, she suggested adding points to a driver’s license for repeat traffic violations, allowing law enforcement to track those points and eventually require individuals to attend a driving school in order to keep their license.

Candidate Ray also challenged the incumbent to consider that parole and probation exist in the letter of the law, but they are hardly, if ever, used. His campaign seeks to standardize these concepts to apply them consistently and fairly for the offenses defined in the penal code. He believes this approach would help avoid breeding an entire class of criminals that deserve more leniency and an alternative path to doing hard time. Candidate Lawson believes in these mechanism as well, and she stated that this is something she was looking into along with Representative Nash (another candidate).

Josh Zimmerman took this opportunity to declare that harsher crimes aren’t punishing enough for those who commit them, while lesser crimes are in fact too harsh in nature. As an example, he pointed to a $5,000 fine for killing someone as being “a joke”, since it doesn’t act as a deterrent for those who would consider such an action. Overall, he felt that times and fines for lesser crimes should be lowered, but that fines for more violent offenses should be raised to serve as a more effective mechanism of the criminal justice system.

Representative Lawson’s performance across these two questions presented quite a dichotomy. At first, she seemed fully in control of the stage, tackling the question of corruption with grace and a commanding presence that silenced her opponents entirely. However, the emergence of that mysterious recording seemed to throw her off her game. Finding herself on the back foot, she struggled somewhat to control the narrative on the second question, allowing Travis Ray to drive the discussion. He challenged her effectively on a number of points, centering the question (which had been meant for Candidate Lawson) on his own platform goals and essentially stealing the spotlight.

That said, Beck Lawson’s debate appearance was largely stable, and she managed to recover from her missteps, demonstrating the benefits of experience on the campaign trail. Still, it is concerning that there allegedly exists a recording of her discussing “putting hits out on people”. While the veracity of this hasn’t been confirmed, it will surely stick in voters’ minds as they head to the polls. Will Representative Lawson’s experience and track record in office outweigh these open questions and the surging performance of Travis Ray?