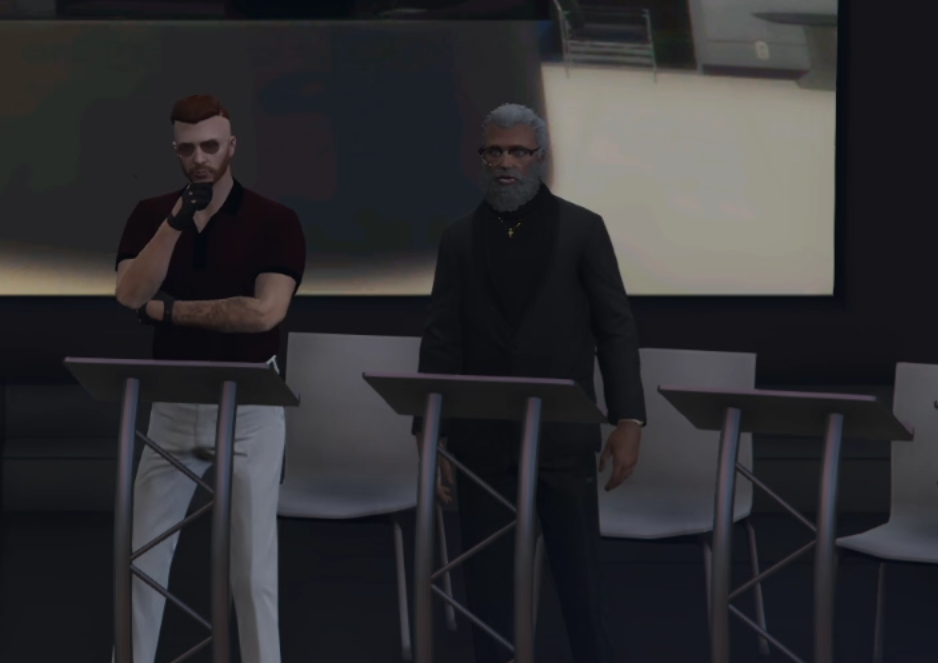 Los Santos, San Andreas – At Sunday night’s State Representative debate, candidate Alwin Ozias was presented with two direct questions aimed at his campaign. He had the opportunity to answer them before other candidates could give a rebuttal to his statements. Let’s take a closer look at what happened.

What is the biggest problem facing the state, and how do you plan to solve it?

This question sought to understand the root problems in San Andreas, and Candidate Ozias started by acknowledging there are many important issues facing the state today. He mentioned crime throughout Los Santos and “chaos all over the place” as major examples. Alwin then focused broadly on his entire platform, mentioning a prohibition on pistol hunting, lowering business taxes, and clearer marijuana laws. He noted that his campaign is more focused on business than issue the city is facing such as criminal reform.

In the open rebuttals, Jacob Wheeler noted that his competition had not really answered the question, instead reiterating his general platform. He questioned how pistol hunting prohibitions is a pressing matter for San Andreas; Alwin Ozias countered with the suggestion that it’s an animal rights concern to fill animals with so many bullets instead of a clean kill from a hunting rifle. Becks Lawson interjected to agree with Candidate Wheeler that he had listed many policies instead of asserting the “biggest problem” as inquired by the moderator.

There are a number of issues in the city, and I think we can all agree on that. However, my platform doesn’t focus on those issues, to say the least.

In response, Alwin asserted that while there are many issues the city faces, his campaign is not interested in addressing them. He reiterated that he’s focused on “helping business”, as well as the aforementioned pistol hunting ban. Then, Candidate Ozias acknowledged that his platform did not do enough to address the issues the city faces.

He went on to state that he’s happy to let other candidates work on the most pressing issues, and that his campaign is about shedding light on lesser-known problems the state faces. Kaori Prince challenged him on this, joining Candidates Wheeler and Lawson to remind him this does not answer the question posted to him. Candidate Prince went on to be the first candidate to actually address the topic head on, asserting that the biggest problem faced by San Andreas today is the difficulties our citizens face in supporting themselves, with many having to resort to grueling quarry labor just to salvage their finances.

Candidate Wheeler gave Mr. Ozias the chance to expand on what was perhaps the most relevant statement he’d made in regards to this question; that he wanted to support businesses better. Given the opportunity, he asserted that clearer marijuana laws would be his top priority in this area. Despite there only being two businesses in this industry today, he feels improved legislation would spur additional entrepreneurship in this area. However, Candidate Prince reminded the audience that this doesn’t benefit the multitude of existing businesses outside that industry.

My platform, yes, it might be specific; it is tailored to certain people. It is also tailored to people who own non-profitable businesses.

In addition to saving the animals and benefiting two marijuana businesses, Alwin Ozias wants to focus on lowering premise taxes for social clubs who operate out of a clubhouse. Despite saying that this would benefit “business owners”, he also asserted that his justification for these lower taxes is because “they are not considered to be a business”. The confusion over these conflicting statements prompted several candidates to speak over one another as time ran out on the question.

What is one governmental department that you feel needs restructuring and why?

The next question Alwin Ozias asked gave him the opportunity to speak about his goals for governmental reform. Continuing the themes of his debate performance, he had no hesitation in declaring the Department of Commerce & Labor as his primary restructuring target. As a serial entrepreneur, he feels the process of opening a business is rife with miscommunication and other barriers, not to mention expensive licensing fees.

He’d like to see the licensing process streamlined to eliminate wait times, citing “two weeks to process” business licenses and “waiting a month for a premise to be approved”. Candidate Ozias spoke to conversations he’s had with people around San Andreas who he feels are gravely concerned about these issues.

To no surprise for anyone in the audience, the first candidate to speak up in rebuttal was Josh Zimmerman, current Commissioner for the Department of Commerce & Labor. He felt his competitor was basing his policies off outdated impressions of their agency, citing that there were only five outstanding business licenses at the time, three of which were related to the Vanilla Unicorn auction (which has since been resolved). He asserted that new business owners aren’t having many issues getting licensed today, and that the maximum business license fee is $350/month, an amount that anyone in the city can make by standing still for an hour and a half.

Candidate Ozias clarified that his real issue is not with business license fees, but specifically the commercial premises tax. He referenced that many citizens were complaining to him about paying $25,000/month for their business locations, which he felt was astronomical. Candidate Zimmerman countered by noting that, outside of five specific businesses which are special cases, no business pays more than $13,000/month for its premises today.

Faced with his argument crumbling, Alwin took a jab at Commissioner Zimmerman, asking him why he can’t produce the exact number reflecting the department’s total monthly tax income. Mr. Zimmerman noted that, while he has access to that information and could calculate it for the audience, it would take time to collate that data from the more than 200 licensed businesses throughout San Andreas.

When questioned by Candidate Wheeler on how he’ll solve the problem with business taxes, Alwin reiterated his platform is focused solely on non-profit organizations and social clubs. He’s not interested in legislation that will benefit business owners that drive the economy through their profits, because they bring in income and should pay the current tax rates. Referencing the apparent existence of 35-40 non-profits throughout San Andreas, he feels it’s most critical to reduce their burden.

Travis Ray chimed into agree, feeling that non-profits provide critical public services that benefit the community and fill in gaps that government services can’t cover. As an example, he referenced the Mohn Nash Community Center in the south side, which will provide programs to help citizens get out of the gang life. These valuable programs deserve a tax break, he asserted.

While Alwin Ozias did speak during the rebuttal portions of questions asked to other candidates, we’ll be focusing our analysis on these two which were posted to him directly. When asked to clearly state San Andreas’ top priority, he seemed almost lost, at first resorting to reiterating his platform, then openly admitting that he didn’t care about solving the most critical problems in the state.

He had a clear answer for the second question, but perhaps we should be concerned that the justifications for reforming the Department of Commerce & Labor appear to be heavily based on conclusions that no longer hold true. Alwin Ozias wants to be your candidate if you strongly care about the core tenets of his platform:

If those ideals ring close to your heart, make your voice known at the polls this week. If your concerns lie elsewhere, Candidate Ozias’ own words say it best:

My platform might not be the strongest platform out there.