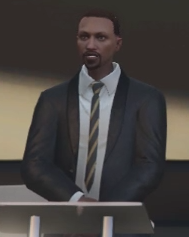 On Sunday, January 9th the public Winter Election debates took place at the Vinewood Bowl. As part of the planned format, each candidate that was present had the opportunity to answer questions directed to them and other candidates were given rebuttal time for back and forth discussion regarding the response. Two questions were posed to Travis Ray during the debate.

The first question for him was clearly intended to address the recent witness report that Ray has been selling steel to an unidentified criminal group for the purpose of gun manufacturing.

Travis Ray: Digging His Own Hole

It was asked, “Given the recent uptick in illegal weapons manufacturing in the state, what actions could you propose that would keep San Andreas citizens safe and these weapons out of the hands of violent criminals?”

Ray began by claiming that he does not currently have a gun license and has no intention of ever getting one. Then he went on to share his stance on the 2nd Amendment. “I am not a big fan of the 2nd Amendment, but that will not be something I’m going to be working to overturn at this time.”

When the floor opened for rebuttal, candidate Josh Zimmerman immediately asked for clarification on Ray’s 2nd Amendment statements. Ray said again that he would not be working to get rid of it and that he understood that he was in the minority with his opinion. Several hypothetical questions were then tossed around amongst the candidates, before candidate Becks Lawson asked Ray directly about allegedly selling steel to criminal organizations.

Ray claimed that as soon as he found out that illegal gun manufacturing was taking place, he stopped selling steel to that contact, and then ran out the rest of the rebuttal clock blaming our own Weazel News for reporting credible witness statements.

The second question that was asked was “What can the state do to address the violence in the Southside of Los Santos?” Ray said “Really, it’s a pretty simple solution, and that’s talk with them. That’s all it is.”

There you have it folks, all of the violence could have all been solved if we had, according to Ray, just made conversation with the perpetrators.

The rebuttal portion generated several questions about what this negotiation and talking would look like in Ray’s eyes. This led to Ray asserting that he knew the Ballas all just wanted the police to take them seriously, which had people questioning how Ray so intimately knew the thoughts and feelings of an entire criminal gang. This interaction speaks for itself:

Suffice it to say, nobody is letting up on any pressure Travis Ray is taking, not even the other Representative candidates. When polling opens tomorrow, decide for yourself if you agree with Travis Ray’s stance on gun control and plans to address Southside violence.