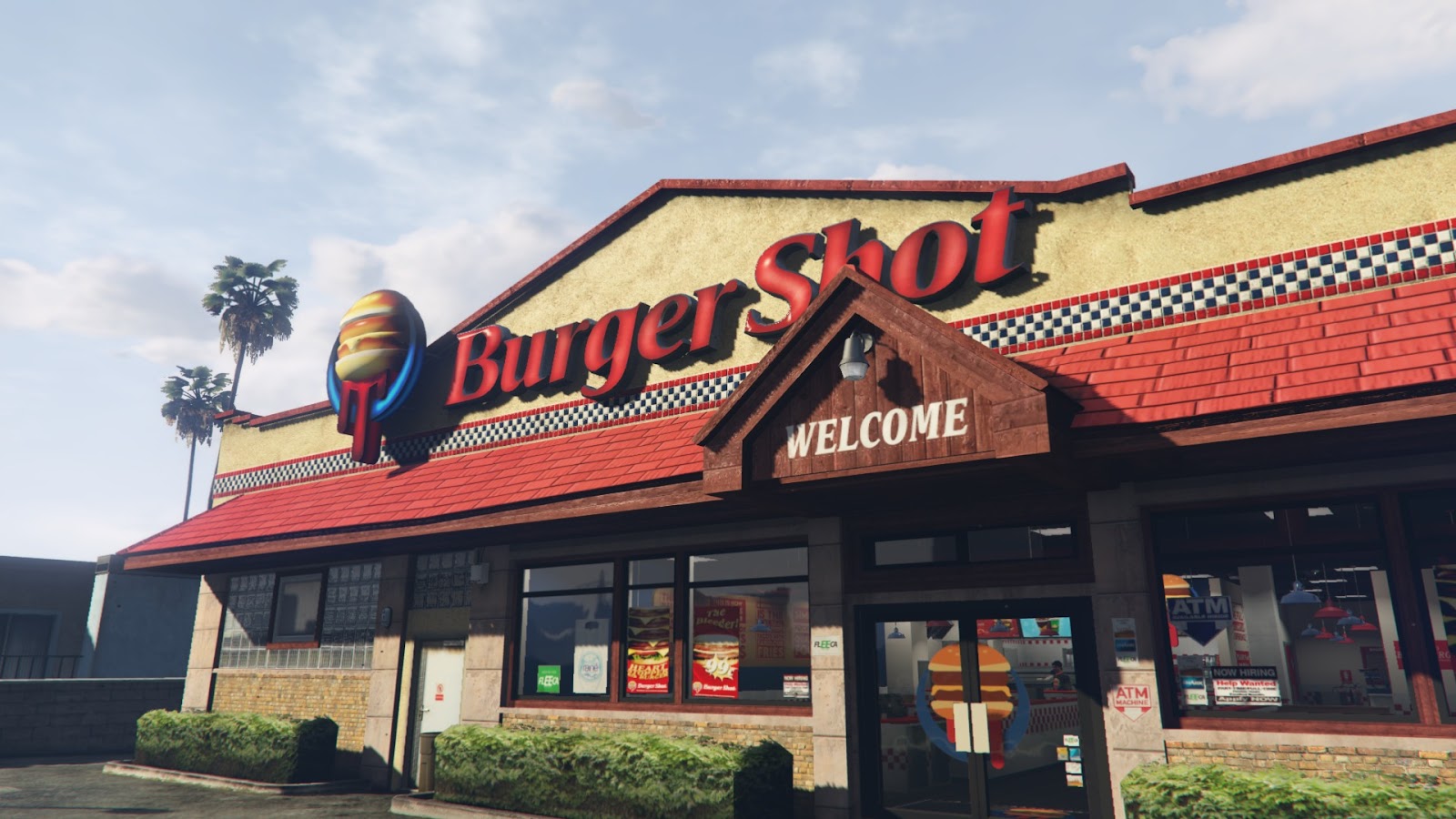 “Ask not for whom the bell tolls…

It tolls for thee…”

Sooner or later death comes for us all. However, it isn’t always in a physical sense. Sometimes a death may come in the simple form of retirement. A career death, if you will. Or am I just exaggerating…?

Regardless of whether or not I’m taking it too seriously, a ‘death’ is soon upon us. Recently, I was given an exclusive scoop that the owner of Burger-Shot (Ruben Thompson) is officially transferring ownership of the restaurant. Luckily I was able to score an interview with the man who will be taking his place, ‘Archie Emerson’.

And to ensure this article wouldn’t be *too* boring, I decided to spice things up a little. Literally.

Prior to the interview, I was dining at the fabulous establishment ‘Ari’s Deli’ and even got to try their famous Hot Wings. Ranging from “Slap yo momma” hot to “Oh my fucking god he need some milk” hot, they’ve got the perfect balance of ‘hot’ and ‘not-too-hot’ options for light-weights and heavy-weights alike. I myself am *not* a total dweeb so I went out of my way to try out their hottest options.

I will not discuss the outcome. Very tasty though!

This did spark a *totally* original idea however, and I figured the best way to make this interview more appealing would be to have Archie try out these wings as I ask questions, conveying the sheer agony he endured through his answers.

As I entered Burger-Shot, the air was filled by the sweet smell of Hamburgers and child-like wonder. Some people forget the magic of Fast-Food as they grow older, but not me. Everyone was joyful and having a great time, and I couldn’t have been happier to ruin the moment by presenting the Wings to Archie.

I watched as his pupils shrunk, and his skin turned pale. I won’t lie, it was pretty funny. Just breathing was enough to show how hot these things were. One whiff of these bad boys, and you’re thrown into a coughing fit. The scent of vinegar was almost overwhelming.

I quickly briefed Archie on what was about to go down and watched as he reached for his first wing with absolute terror in his eyes.

The first bite was quick and small. I asked Archie his first question.

Weazel News: “What do you think of the Wings?”

Archie: “They’re a little bit cold but, you know.”

So far so good. Unfortunately for Archie, this wouldn’t last very long. Not even ten seconds later it hit him. He looked like a kid being told he’s not getting chicken nuggets for dinner.

Archie: “Okay I’m feeling a kick… Yep. Fucking hell, what did you spice these things with…? Did you throw a bit of… Did you put fucking lava in it…?”

His breathing grew shallow and his eyes began to fill with tears. Now that we were finally in the proper mood, I began to ask away.

WN: “With Ruben on his way out, when is it that you’re going to become the new boss officially?”

Archie: “As soon as we get the paperwork done.”

WN: “Is there any particular reason for Ruben leaving the business?”

His once pale face transitioned to a deep red, like a fresh sunburn. It was pretty rough to look at. His hands were shaking, but he was able to take a sip of water to try and quell the pain.

Archie: “The water made it a little better, but I know it’s gonna get worse again. I feel like I’m gonna throw up.”

This was not what I wanted to hear from the man sitting right in front of me.

Archie: “I don’t know why Ruben is leaving the city, or how long he’s gonna be leaving the city for, but he came to me the other day and trusted me with the position. It was pretty sudden.”

WN: “When does the transitioning of ownership finalize?”

Archie: “Just waiting for the DoCL to happen, then I’m on the books. But really I’m just going to be holding onto the reins until Ruben decides to come back.”

He took a quick moment to use some of those really trashy brown napkins that are rough as hell to wipe his brow.

Archie: “Is anyone else sweating…?”

No. No one else was sweating.

WN: “So during the transition, will Ruben still be raking in cash from the business, or has that already been swapped over to you?”

Archie: “He just asked me if I could look after the business for him. We all are loyal to him, we love him. But when Ruben comes back, he’ll be getting it right back.”

WN: “Are you planning on changing the way the business is ran, or are things going to be kept the way they are?”

Archie: “Ruben showed us how to run the business. I don’t think there are any changes that need to be made at all, I think the business practically runs itself.”

Right after listening to Archie make the wettest, grossest burping sound I’ve ever heard in my life, I asked him the most important question of the interview.

WN: “How do you feel after eating those wings?”

Archie: “Dead inside. I feel like the lining of my stomach has been eroded. You know how a rock gets after being in the sea for a thousand years? That’s my stomach right now. The water did not help. After this, I’m gonna head to Zonah to get my third degree oral burns sorted out.”

The look he gave me was miserable, and indescribable. I hope someday he can forgive me for what I put him through. But for whatever reason, I feel like he never will…

WN: “Finally… What would you like to say to Miguel, the man who made these wings?”

Hear that Miguel? He says fuck you. Asshole. Thanks for the tasty wings, though! I will certainly use them for future interviews, along with using them as my on-duty snacks. Love the ‘zest’ they have, even if they make me sob uncontrollably.

Too bad Archie’s probably in the ICU because of ’em… I’ll get back to you guys on that one later. Thankfully if he dies however, he won’t be able to sue me in retaliation! I’m too poor anyways… For legal reasons, that was a joke. See you all next time!