Day One of the campaign started out with Posters and candidates rallying for support on Social Media and in a public town hall, led by candidate Becks Lawson.

The event was attended by multiple candidates and current representative James Paxton. In the event Becks Lawson made multiple promises to the people of Vinewood and the greater state of San Andreas for Transparency, Communication and the Empowerment of Civilians. James Paxton formally endorsed Becks Lawson for the role of representative. Josh Ford also talked on stage, talking about his different policies and views.

During and after the townhall a small feud was brewing online as candidate Willliam Benning accused candidate Josh Ford of being a ‘two timer’ and stating he was losing his hair because of a ‘bad case of lice’.

Shortly after, James Paxton, who is a current member of the legislature, endorsed both Jorge Paxton and Becks Lawson.

Candidate Kash then joined the tweetfest, as well as tweeting some odd hashtags: 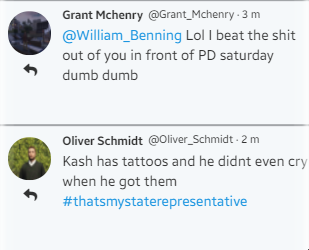 Candidate Kash then tweeted at candidate Benning, Benning then responded:

After some chaos the following tweet was sent by Candidate Benning, tagging a Weazel news Reporter who had commended on the feud:

Candidate Bradstock then commented on the situation and a user named Mike told Benning he had lost “a few votes”:

This feud lasted about 40 mins, with continuous  tweeting action from the candidates involved.

In summary, from these tweets we can infer that some agreement was made between Candidates Ford and Benning which was somehow broken by candidate Josh Ford being on stage at candidate Becks Lawson’s event. This single spat caused a 40 minute feud which involved multiple other candidates, particularly Candidates Kash Keller and William Benning. The seriousness of the situation was elevated when William Benning stated to “anyone who comes after me” that they should be prepared to “kiss their family goodbye.” At this stage there have been no penalties lodged against any candidate involved in this twitter spat.