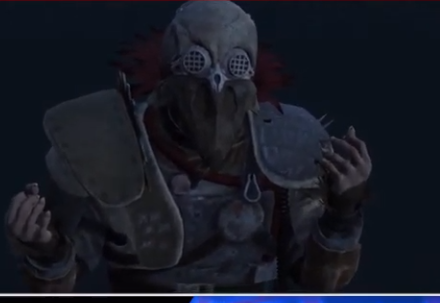 Three weeks ago Weazel News reporters Billy Banter and Gina Marin aired a video of a man they dubbed “The Vassal”.  The video (link below) showed a man in a post-apocalyptic costume with a bird-like helmet speaking through a voice modulator, with odd wailing-like sounds playing in the background.

During the video the unidentified man called himself a “Vassal” or “vessel”, chosen, though not specified by whom, to perform sacrifices to save mankind, 66 to be exact, and appears to have a numbered list of the ‘chosen’, boldly naming 2 of his would-be sacrificial lambs, number 14, Trooper Clark, and number 11, Blackwell.

The chilling video and its subject went mostly unnoticed by many San Andreas residents until recently when an increase in sightings and incidents have brought it to the forefront, especially in the Paleto Bay and Sandy Shores area.   A few nights ago while riding our bikes on Paleto Blvd, my roommate and I were stalked by an individual in a non-descript vehicle, the sounds emanating from the vehicle matched the background noises in the video publicized by Banter and Marin.  Another report involves a man who alleges that someone matching the person in the video stole his motorcycle at gunpoint.  According to witnesses, that same night The Vassal also led the police to a construction site on Paleto Blvd for unknown reasons.

Detective Sergeant Sally Jenkins of the Major Crimes Division states that it is believed that this is not the work of a single individual, but that of a cult with several members, and unrelated to the “Apex Predator” or the rumored “Harmony Cannibal”.   She revealed that the police recovered the bodies of two locals from Sandy Shores who were believed to have fallen victim to The Vassals and whose identities have not been disclosed.  While the cult’s operations have been primarily focused on Paleto Bay and Sandy Shores, Detective Sergeant Jenkins states they’ve also been spotted in other sectors of San Andreas and warns the public that the cult should be considered extremely dangerous. She assures us that despite the difficulties and complexity of the case, LSPD is working as hard and fast as it can and asks the public to cooperate and stay safe.   She urges people to stay away from the locations mentioned in the video and remain in groups since most encounters have occurred while people were walking around alone.

Should anyone encounter anyone who matches the description of The Vassal they should not engage the individual, seek safety immediately, and contact the police.